The beautiful song, "Falling Slowly" by Glen Hansard and Markéta Irglová won an Oscar last weekend and Pitchfork caught up with the couple that penned it. The two discuss small venues, John Travolta, Bob Dylan, and of course...Oscar. Check it out here.

Posted by Unknown at 7:06 PM No comments:

Orba Squara is the New Moby


Orba Squara's Sunshyness is a relaxing Saturday afternoon album. It feels more summer-y then then it feels outside today, but it can warm you up for sure. Singer/songwriter Mitch Davis (who is Orba Squara) makes you feel that a day at the beach is just around the corner. Chill out with it and those of you that watch TV might recognize, well, just about every song. Great musician, wonder how he sells products. Maybe Apple owes all their iphone sales to his wispy voice and sweet ditties.

We could go on, but you get the idea. Check out the rest at their myspace.
Posted by Unknown at 10:09 PM No comments:


A great week of new releases births a great week over at spinner. This weeks goodies include; always talented Stephen Malkmus, the aforementioned Beach House, gorgeous new Goldfrapp, Dolly Parton, and the Cowboy Junkies. Go check them out if you get a second.
Posted by Unknown at 9:36 PM No comments:

Been revisiting the old Beach House album of late, boy it's good. This here video is for the track "Heart of Chambers" from the Baltimore duo's new album Devotion.

Posted by Unknown at 7:35 PM No comments:

The UK dance makers, the Ting Tings will infiltrate the US with tour dates surrounding their SXSW performance. They are listed below the video for "Great DJ" from their unreleased new album of the same name. Go ahead and press play, we dare you not to dance.


The Icelandic band, Sigur Ros, that we love here at Musicology NYC has released this information on their website:

27 February 2008 
sigur rós have returned from new york’s sear sound studio with foundations for 11 songs which will appear on their next lp. the band will continue recording the album with producer flood in their sundlaugin studio over the next couple of weeks, with a tentative release date of late spring / early summer. excepting the crowd at the tiny sirkus concert last month, no one has heard any of these songs before.

Thom Yorke with REM doing "E-bow the Letter" and Michael Stipe with Radiohead doing "Lucky". Must have been amazing shows to have experienced live. Was anyone there?


How Cloud Cult isn't huge as say Modest Mouse is beyond me. But it's just as well, I don't mind keeping them to myself. Their songs are so heartfelt and an intense. As mentioned, they have a new album coming out April 8, 2008, called Feel Good Ghosts (Tea Partying Through Tornadoes). Pitchfork has the first song from it. You can download it below.

Posted by Unknown at 8:57 PM No comments:

We're listening to this dude John Maus a lot. Check him out via his myspace. "Do Your Best" can really get jammed up inside your brain. You'll have to go to myspace to hear it though.


Plus he's funny, from his myspace:

It took this Ariel Pink cohort five years to write and record his debut album, and only five minutes to become more annoying than Ariel Pink.
- CMJ

For me, this is just too weird. The first couple of tracks make this the most skip-able album of 2006.
-Subba Cultcha

Apparently, Maus spent five years working on this album, which is a shame because, frankly, its awful.
-Vice

There isn't one song you could call 'good' on the whole album.
-Music Zine

Overall, I can't recommend this album even as a novelty listen. Maybe I just don't get it. It seems as if Maus sabotages practically any hint of an interesting melody, lyric, or instrumental part with a blatantly grating one at almost every turn.
-Indie Workshp

Maus's baroquely deadpan voice - and thats being polite - effectively spoils many a song. Some will hear a little Nick Cave in it; others will hear a man crapping out of his mouth.
-Drowned in Sound

If it is supposed to be funny, it is not. If it is meant seriousy, then Maus needs some SERIOUS help.
-Another Zine

His music now lacks the surreal, jarring juxtapositions that made his earlier work such a rewardingly confounding experience. Maus seems content to sing his heart out instead of rattling cages, which is rather a shame.
-The Wire

If you can't laugh at yourself...laugh at the critics.
Posted by Unknown at 11:44 PM No comments:


This new LCD Soundsystem track is from the upcoming black jack film, 21. The songs is pretty bad-ass. Via Stereogum.
Posted by Unknown at 11:37 PM No comments:


Speaking of 90's rock, there will be a new movie about the underrated grunge-metal band Alice In Chains. It will be called, Get Born Again, after the book by journalist Adriana Rubio. You can read more at the movie's myspace. Layne Staley will be played by Lathan McKay, who's photo is shown here. Looks a lot like him.
Posted by Unknown at 8:52 PM No comments: 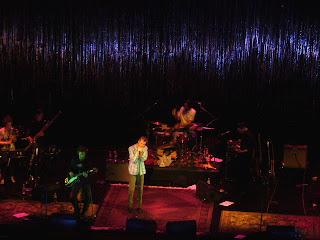 Last night Brooklyn's The National performed at the Brooklyn Academy of Music, "Brooklyn Next" series. Seeing a band like them at seated venue was quite unusual for the fans as well as the band. You could sense them feeling a bit uncomfortable and it took a few songs before they actually settled into a groove. Even singer Matt Berringer mentioned something about it. Musically the band sounded great despite guitarist's Bryce Dessner's back injury. He remained seated for the majority of the performance. The stage seemed rather small because of his lack of mobility. This, however, took nothing away from the music as the band played tighter than ever. The horn section and orchestration filled in the set beautifully. A highlight of the evening was seeing Sufjan Stevens step onto stage to join the band on the track "Ada", which he co-wrote with the band. And of course, "Mr. November" rocked.

Set list (and photo) via TMS (one complaint, we are at a rock show and notes nor pictures are allowed because the ushers say my phone is bothering other spectators - and how did you pull it off TMS?):

The people that brought you a pretty weak Coachella have officially made it up to us. They have finally made their way east for "All Points West". The festival which will be held in New Jersey's Liberty State Park from August 8 to August 10 will have Radiohead headlining on Friday and Saturday! The lineup is pretty damn stellar. And there's that Jack Johnson again headlining on Sunday. Should we be listening to him? Tickets are available on 2/29 via Ticketmaster. Here's the lineup, enjoy:

Not sure if more will be announced or not. Either way, I'll be leaving NYC for this one (admittedly not too far). See you there!
Posted by Unknown at 6:13 PM No comments:

Awful excited for "Band of the Month" contender The Big Sleep at the Mercury Lounge tonight. The intesity of the studio work is enough to get anyone pumped. It is a record release party in support of Sleep Forever. You can read a review of it by Nick Greto over at kevchino.

I imagine tonight will look and sound something like this:

Posted by Unknown at 5:57 PM No comments:

Soul Coughing was one of the greatest bands to make their way out of the messy '90's alt rock radio scene. Mike Doughty was their singer with the ultra cool voice and even sweeter delivery. He has a new album that dropped just yesterday. It is streaming in it's entirety over at Spinner. His last record Haughty Melodic was a solid one. The new one, Golden Delicious, seems a little more poppy and maybe a little more jazzy too. He is trekking the North America as well. Check out his new video below.

A little something to go along with the Guillemots news we posted last month. How about a new song called "Get Over It" from their forthcoming Red LP? And they are looking for a female singer to tour with them? Pretty exciting. This was on Jonathon Ross this past Friday night:

And this from their myspace blog:

we is looking for a girl singer ??

The main thing is just finding someone with a really distinctive, uninhibited voice who could add some harmonies / noises to some of our songs, and obviously, someone who is also able to be on tour a lot of this year.

So. . .if anyone out there thinks they might fit into the strange little sung-glove world of Guillemots, send an email to

with whatever you want to tell us about yourself and some link to listen or download some examples of your voice or voices... 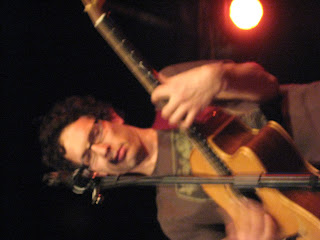 Once again Nick Greto went out to the Mercury Lounge to check out the early Yoav show this past Saturday. You can see his full review over at Kevchino.

Watched About a Son tonight. Mr. Cobain's birthday is tomorrow. This is a video for a song called "Smells Like Teen Spirit". Remember it?

Oakland based producer Amplive has finally released his free download of his Radiohead In Rainbows remix album, titles Rainydayz Remixes. This finally sees the light of day after Radiohead wondered why they were never contacted about the release. Amplive agrees that he should have contacted them and now an agreement has been reached after Amp's youtube plea:

Kicking and Streaming: Genghis Tron - Board Up The House


Genghis Tron's are melodic scream metal. Their new album Board Up the House is streaming at their myspace. The band hail from Philadelphia and they have a whole heck of a lot of upcoming dates.