LA based band Dengue Fever has a somewhat familiar sound. Dark, yet astonishingly friendly and pop-y, they remind us at times of a Cambodian-pop meets surf rock version of the Cocteau Twins. At other times they don't remind us of anyone or anything. Lead vocalist Chhom Nimol, accompanies the Californian brothers Holtzman with near perfection. Their third LP, titled Venus On Earth is (sort of) streaming at Rhapsody (if you have your free listens or are a subscriber).

Below is a trailer for a documentary about the bands visit to Cambodia (native home of Nimol), titled "Sleepwalking Through the Mekong". Under that you'll find tour dates. Mercury Lounge looks like one of those can't miss shows.

Checkout the documentary trailer about their trip to Cambodia

Add to My Profile | More Videos


Something about Mark Kozelek's crooning that makes you want to curl up in bed as the rain raps on your window, reminding you with each successive tap that you are all alone in this world. And music that makes sadness feel so perfectly acceptable and even welcomed is hard to come by.

Kozelek's once again working under the Sun Kil Moon moniker and will release a new album titled April on April 1, 2008 via his Caldo Verde Records. It will not be all covers as was the last Sun Kil Moon record (2005's Tiny Cities consisted of all Modest Mouse tunes). Check out track number six, "Moorestown" here (be sure to click on the cover art for April).

Posted by Unknown at 9:49 PM No comments:

So Ben Folds rules the earth as far as I'm concerned. In this video he has about a million guitarists and even though it's a Postal Service cover these dudes strumming away make it worth the post.

I really dug Brighton's, the Kooks, first record, Inside In, Inside Out back in 2006. I am looking forward to their new record which will be titled Konk and will be released on April 14, 2008. Here's a sneak peak:


Their Myspace lists Jack Johnson as an influence (what the hell is going on?) and these tour dates:


These guys are selling an awful lot of shows out. Are they really that big?
Posted by Unknown at 11:16 PM No comments:

Erykah Badu has been missing since 2003's Worldwide Underground. Her new album, New Amerykah will be available 02-26-08. The new single "Honey" is streaming at her myspace. Below, she discusses the single.

Add to My Profile | More Videos
Posted by Unknown at 11:21 PM No comments:

One of Athens, Georgia's newest dears, the Whigs have a new album called Mission Control out now. This interview is from NPR. The band discusses the new album and naming themselves, among other things. They will be on Letterman tomorrow night. The album was still streaming at Spinner when this was typed, but it probably will fall off tonight, unless they run it again this week. They play at the Music Hall of Williamsburg on February 1. Other tour dates are below.

Posted by Unknown at 2:01 PM No comments:

Looks like those rumors of a Stone Temple Pilots reunion are all but confirmed. Slash now joins Weiland in the reunion talk, via Rolling Stone.
Posted by Unknown at 12:00 AM No comments:

If this song by Brooklyn's Hercules and Love Affair doesn't get you dancing then, well, you ain't so fly. Musicology NYC imagines if they hooked up some loud speakers and hung them out the window the whole damn city would be jamming. In case you don't recognize the voice, that's Antony. I believe the new album will be available on March 8th of this year. Yay!

Seemingly everyones current fave Brooklynites, Vampire Weekend were interviewed and performed on David Dye's World Cafe show. The set list went like this:
Here is their newest video for the song "A-Punk":

Sigur Ros is one of the bands we never tire of here at Musicologynyc. And apparently they are hanging in our town right now. Keep your eyes peeled for the mysterious Icelandic quartet. Maybe they'll play you a ditty. This from their website:

the boys have got together a - by their standards - big bunch of material and are leaving iceland for new york to work with flood on what will hopefully be a quick, neat job - maybe even ready for release by the summer.

Posted by Unknown at 9:13 PM No comments:

It seems that we have been waiting for this album for like ten years (we have), but finally Portishead have given us a release date for their new record via there website . They have also added tour dates, but still no US dates (except Coachella). These dates are listed below the words from the Portishead webpage:

We're pleased to announce that we'll be releasing our album, titled THIRD. on April 14th 2008. The album has 11 tracks and is 49 minutes 13 seconds long.

MGMT & Others Stream at Spinner

It looks like this is the first big new release week of 2008. All kinds of goodies streaming over at Spinner for you to sample before you buy.

In honor of the possible STP reunion reported by the Miami Herald here is a video of "Sex Type Thing" from the bands debut, Core. 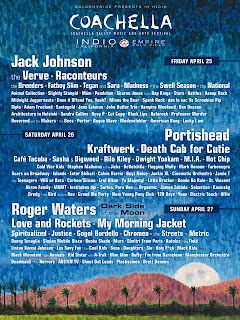 It's official. And rather disappointing. No Led Zeppelin, no My Bloody Valentine but there is Roger Waters and My Morning Jacket. Oh and Jack Johnson? This years lineup looks like it'll be attracting more jam band fans than usual.
Posted by Unknown at 11:32 PM 1 comment:

Moldy Peaches Are Huge! Perform On The View!

The Moldy Peaches are to Juno as the Shins are to Garden State. No doubt. And the band is riding their fame all the way to The View. Kimya Dawson and Adam Green performed their resurrected tune “Anyone Else But You” on the hit ABC show this morning to the simultaneous gasps of many hipsters around the world.

It's actually quite nice.
Posted by Unknown at 10:52 PM No comments: