Intermisions at Pianos on LES

Unfortunately this video cuts in and out. Either way it gives you an idea what Intermissions sounds like.

Mew will be releasing No More Stories Are Told Today I'm Sorry They Washed Away No More Stories the World Is Grey I'm Tired Let's Wash Away on 8-25 and we couldn't be more excited. Check out their new video for "Introducing Palace Players" below. Via Spinner.
Posted by Unknown at 10:39 PM No comments:

Woods - "Where and What Are You" video

An album that has sort of been forgotten already is the Woods 2009 release Songs of Shame. I suppose we'll see at the end of the year.

For now watch "Where and What Are You" via P4k.

Posted by Unknown at 8:48 PM No comments: 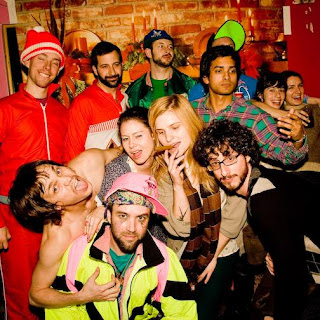 Totally looking forward to this show tomorrow. The Suckers have been on the ipod for some time and they were recently named to Rolling Stone's "Hot List" Cool for them.
Also can't wait to catch Intermissions again. If you are going to the show be sure to be there by 10 PM to catch them. Cover is only $8. 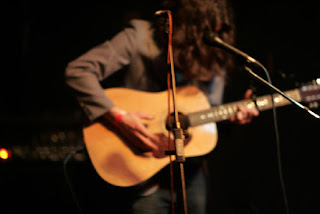 We had a blast when we went to Rooftop Films and we may be checking out the Kurt Vile and The Drums.

See all the upcoming shows:

Just because I have been listening to this album so much.

Posted by Unknown at 9:29 PM No comments:

New Thom Yorke via Pitchfork. I wonder if this will turn into a Radiohead song. From Latitude Festival 2009. 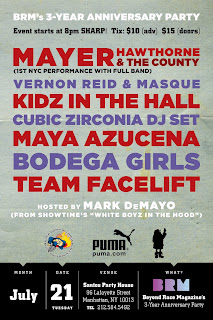 Today at work we had a morning meeting that was completely pointless. Sounds like every day.
All I kept thinking was how much I was looking forward to making this show. Loving what Mayer Hawthorne I have heard. Want to get my hands on the full length. It's due 9/9/09. Go to that Myspace link ASAP> Learn the lyrics. Sing a long. Go to the show. It will help me get through this week at work.
Posted by Unknown at 9:52 PM No comments:

Thom Yorke - "ALL FOR THE BEST" New Song Via Stereogum

This song is a must hear for all Radiohead fans. It's called "All For Best" and it's from the compilation album Ciao My Shining Star: The Songs of Mark Mulcahy. The album is a release to help remember and help Mulcahy through the recent sudden death of his wife. Thom Yorke doing Miracle Legion, alright! Via Stereogum
Posted by Unknown at 11:26 PM No comments: 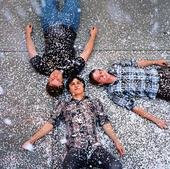 The last Dodos album was a favorite of ours here so we are very excited that the band is giving us a sneak peak of the new one called Time to Die. We haven't given a listen yet since Depeche Mode are playing live on the world cafe as the new iPhone is booting up. But first thing tomorrow we'll check it out. Give a listen here and let us know. You can also watch a video and get a free download.
Posted by Unknown at 12:33 AM No comments: 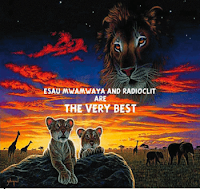 Very excited to report that The Very Best will be playing Le Poisson Rouge this Saturday July 18th in preparation of the band's debut album WARM HEART OF AFRICA . If you haven't heard Esau Mwamwaya and Radioclit are The Very Best get it FREE here. The new album will be out in September via Green Owl. 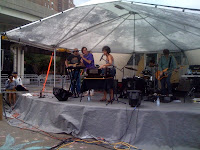 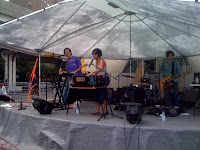 Opening Act is a new feature here at Musicology NYC where we highlight the lesser know acts in the music world.

The first band we will feature is already a favorite here:

As usual when it comes to Shilpa Ray and the Happy Hookers they did not disappoint. The problem is there wasn't many people there to take it in. Though my camera died, I still was able to snap these photos via iPhone. Give Shilpa your ears and you will undoubtedly be hooked. See her live and be blown away.
Posted by Unknown at 10:24 PM No comments: 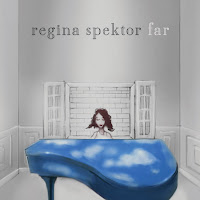 Regina Spektor was probably the most pleasant surprise of 2006. Her album Begin to Hope snuck its way into many top ten lists. It was odd. There really was nothing new about her sound-piano pop ala Fiona Apple. But there was something that felt real about her tunes. Something that said, believe me when I tell you...
And I did.
When I read about Far's release I was hesitant. I wasn't into Begin to Hope's predecessor Soviet Kitsch. Could lightning strike twice?
The first song I heard - the quirky "Eet"-was enjoyable. But when the album came a few weeks later I didn't think it was going to do it. Nothing grabbed me.
I even received a recommendation from a friend, "It's great" she said. On listen two I sent her a text that said, "Is this gonna grow on me?". In turn she responded, "How many listens?". And I told her. "Listen three is where it will hit you", she assured me.
Listen three came and went. Still nothing.
And when I sat down to type my thoughts, suddenly, there it was.
This album was catchy and quirky like Hope. And though it will probably not be on my end of year list, it was a surprise once again.
My favorite tracks are the bouncy "Machine" and the sentimental "Genius Next Door" but there are a handful of sweet ditties on this album.
It seems Regina Spektor has the quirky-Russian-piano-pop genre cornered. Thankfully, I waited to write these thoughts. There would have been a disservice done at listen three. So when you get it, hold out for 5 listens. Promise, it's worth it.
Yeah, "It's good." Get it here.
Posted by Unknown at 11:01 PM No comments:

The National Rifle song "It's Just Whiskey Mama" is blaring through the speakers right now. The neighbors are screaming when they should be listening closely.
It must be listened to loudly. It's one of those. And that's a good thing. Check out this fan made video by Gregogard27. Crank it.

Casiotone For the Painfully Alone - Vs. Children 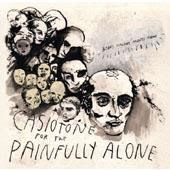 Casiotone For the Painfully Alone's Vs. Children wants to be one of the best releases of the year. After one listens it seems so heartfelt and true that one expects only more of that. But as the listens accumulate this album falls by the wayside. I haven't gone back to it as much as I originally thought I would. However, other critics seem to love it. What do you think? 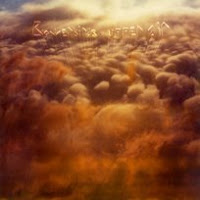 Listen before you buy via Spinner:

The Twilight Sad - "I Became A Prostitute" VIDEO

We have been listening to the Twilight Sad's last record Fourteen Autumns and Fifteen Winters A LOT in preparation for the new one Forget The Night Ahead which will be available on September 22, 2009. Although our judgment is usually off on the size of bands, I don't think these guys are that big and they should be.

I suppose we do not need McCarren Pool to enjoy this years line up!

New Eels Video for "In My Dreams" Premiers On Bands Myspace

The new Eels album may not be as strong as the first single but this one is another winner, "In My Dreams".

EELS - In My Dreams - from HOMBRE LOBO

Posted by Unknown at 6:21 PM No comments: