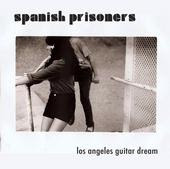 We were fans of Spanish Prisoners debut LP, Songs To Forget.  And even popped it on today to make sure we still were fans after we received this press release and yeah, still good.  Below is news on the new FREE EP.  Stay tuned for a review.

We are excited to announce that on April 20th, 2009, Brooklyn-based band Spanish Prisoners will release their new EP, “Los Angeles Guitar Dream” for free through their Bandcamp page.

Following an acclaimed and eclectic debut album (Songs to Forget, Exit Stencil 2008), Spanish Prisoners, led by songwriter Leo Maymind, had a busy year. The band was invited to play shows with Daniel Johnston, John Vanderslice, and Foals; they were featured as Paste Magazine’s NYC Band of the Week; and they were interviewed by such media outlets as Brooklyn Vegan and NYC Taper. Following this flurry of activity, Maymind set about to define a more cohesive identity for his ever-evolving musical project.

Spanish Prisoners are set to celebrate the release of the EP on April 25th, 2009 with a show at Crash Mansion in Manhattan, NY.