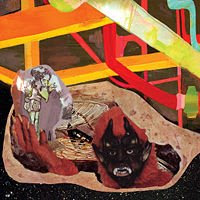 Wolf Parade's debut album Apologies To The Queen Mary was made of the stuff that makes indie rock, indie rock. It was dark yet danceable, well-produced but honest and immediately larger than it's anonymity. Signed to Modest Mouse's Isaac Brock's division of Sub Pop in 2005, the band had built a small buzz around their 2003 debut EP that would set them on an upward trajectory. Brock produced most of Queen Mary and assisted in making it feel like a classic almost from listen one. Wolf Parade immediately sat beside Modest Mouse and other more established indie acts. Between the release of that album and the soon to be released At Mount Zoomer, Wolf Parade sat on hiatus as the members worked on their many (damn good) side projects (Handsome Furs, Frog Eyes, Swan Lake, and Sunset Rubdown among others).

But in 2008 we are introduced to the band once again. On At Mount Zoomer the band picks up where they left off and they do so by moving progressively forward. There are no songs other than "Call It A Ritual" that will catch you on the first listen as particularly fantastic, but as most good albums do, after a few more listens, the shit hits you hard and reminds you what good rock music can do. With two vocalists and chief songwriter's (Spencer Krug and Dan Boeckner) who's styles didn't quite clash or mesh on Queen Mary have found a way to fold snugly around each other. A song from Mount Soomer may be either a Dan or Spencer song but now it is more prominently a Wolf Parade song.

Examples of this are heard on the Boeckner penned "Soldier Grin" with it's synth undertones and it's driving guitar. "Language City" is another Boeckner song with pounding piano that drives home the "All this working/Just to tear it down" chorus. And of Course "Call it A Ritual" which hints at song of the year. On At Mount Zoomer Wolf Parade have re-established themselves as a force to be reckoned with in today's modern indie world. No matter how many side projects this band reveals in the future, they will be around for a while. Well, at least, they better be.

At Mount Zoomer is now streaming at the bands myspace. Check it out!